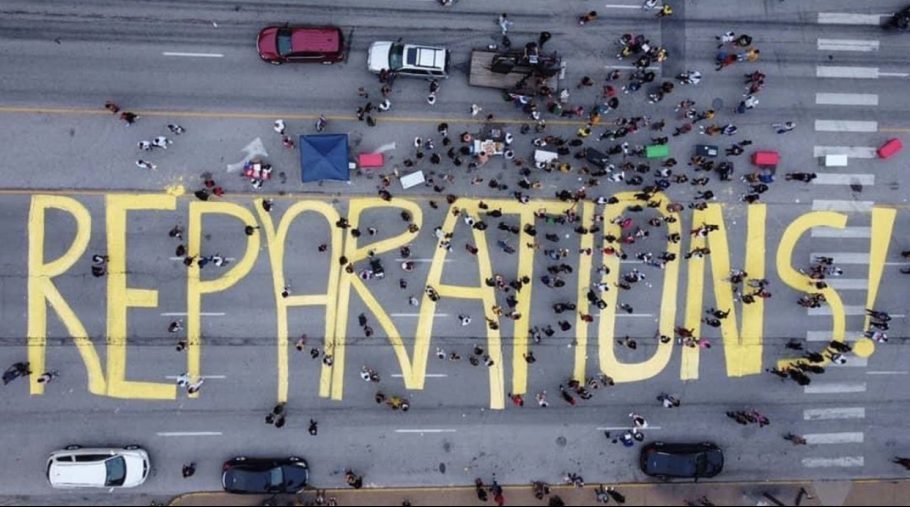 Reparations can take many forms. Let’s start by being honest about what we’ve wrought

There is no resolution I crave more than for us to stop binging on lies. Like most opiates, they are as lethal to progress as they are numbing to awareness.

My desire catalyzed nearly four years ago as I moderated a panel discussion of “I Am Not Your Negro” in Columbia City. A multiracial audience packed the Ark Lodge Cinemas to watch the James Baldwin documentary. With narration by Samuel Jackson, the famed writer spoke on the pervasiveness of white power in American society, and its destruction of the humanity not only of Black people, but of all people, including white ones.

Moments after the credits rolled, the theater was filled with a heavy solemnness as people bowed their heads in reflection, some even tearing up.

Here, I thought, is finally a moment where we shed the infantilism inherent in favoring mythology over truth. Here is a moment where we can face what we’ve been and done as a country, and a city. Here is where we go about the business of reconciling our past accounts with our present-day aspirations.

It took a grand total of 30 minutes for that balloon to deflate.

During the audience Q&A an Alabama transplant gushingly praised Seattle, for how much it wasn’t Alabama. To be in a theater with multiple races meant we “were doing things right here.”

The majority white audience burst out in applause.

The majority of people of color on the panel exhaled leaden sighs.

Seattle may not have the scars of Birmingham, but its wounds are still ghastly.

Belying our city’s reputation is the fact that it was committed to segregation early on.

Our inequities parallel those of our nation. And like the rest of America’s they are authored by human hands, not those of nature. As the University of Washington’s Segregated Seattle project shows, Seattle locked people of color out of the labor force, medical care and entrepreneurship.

But our city’s greatest sin may have been its practice of redlining, which confined people of color into housing tracks such as Seattle’s Central District that were deemed less desirable. With ZIP codes an increasingly greater determinant of social mobility than work ethic, the discriminatory practice deprived families of the ability to accumulate generational wealth through homeownership.

A Seattleite who grew up in the redlined district of the city in the ’80s has a lower income today than a Seattleite who didn’t, according to the Opportunity Atlas, which analyzes social mobility data.

It also contributed to the gulf that’s defined America as much as football and Coca-Cola.

In 1968, the Kerner Commission, tasked by the Johnson administration with studying the origin of the inner city uprisings of the late ’60s, said of the destitution that drove the uprisings, “White institutions created it, white institutions maintain it, and white society condones it.”

And there lies its remedy.

Duke economist William Darity Jr., who co-authored “From Here to Equality: Reparations for Black Americans in the Twenty-First Century,” pegs closing the racial wealth gap at $10 trillion to $12 trillion. For context, the United States GDP in 2019 was about $21 trillion.

The colossal sum triggers his reservations about localities calling any remunerative efforts reparations, such as those underway in California. Neither states or cities can afford the tab.

Darity is also concerned that local efforts billed as reparations could undercut a national push toward true reparations. People could argue that reparations have already happened.

However, this doesn’t absolve states or localities. And some are undertaking a public accounting of their past.

“This is about identifying systemic Black policy solutions and eradicating disparities, which no longer make it a liability to be Black,” says Chris Rabb, a Pennsylvania state legislator.

Rabb, a Democrat, has put forth a reparations bill he hopes can be used as a framework for other localities, including Seattle.

The bill would create a compendium of historical laws that are explicitly racist, putting past deeds and inaction up for public scrutiny. In Seattle, that would make Article 34 of Code of Ethics for Realtors, wherein the city permitted racial discrimination in housing, open to examination of how it devastated Black generational wealth.

Most critically, his bill would create an individual board to mandate state money be appropriated to historically Black neighborhoods and institutions most impacted by systemic racism. This allocation would persist as long as racial disparities in the state did.

While I agree with aspects of Darity and Rabb’s approaches, given that 80% of Americans stand against cash remuneration for descendants of enslaved Africans, I believe a more politically realizable solution exists in universal programs such as “Medicare for All” and equitable education funding — moves that would disproportionately benefit Black people.

Black people would be the targeted but not exclusive beneficiaries of these policies, as evidenced by affirmative action. Billed as a policy prescription for Black uplift,it simultaneously elevated white women.

Locally, Seattle’s mayor and City Council have redirected money toward the Black community as part of recent equity initiatives. But reparations talk has been mostly limited to a state environmental task force saying reparations may be needed to address environmental health disparities.

There are grassroots efforts like those of the Seattle Democratic Socialists of America that are developing a reparations fund for monetary compensation to the Black community. The group hopes the fund can serve as a model for larger-scale efforts in the country over time, according to Kelli Branch, a co-chair of Seattle DSA’s Afrosocialist caucus.

I have no idea which reparations approach will or won’t work nor what is politically possible, given Americans’ lack of agreement around wearing a mask for public health considerations.

I do know there is one form of reparations that is immediate, powerful, transformative and painful: a commitment to blunt, inexhaustible truth recited throughout our schools, offices and legislatures.

Knowing what we were, and how that led us to what we are, is the vehicle for any nation, city, or individual seeking maturity and wholeness. Our growth, driven by overcoming our addiction to a fictional America and Seattle, must never cease. And it must extend to the Native, Japanese, Jewish, LGBTQ and several other communities.

Will that create a more equitable country overnight?

No, but it will make us a more honest one.