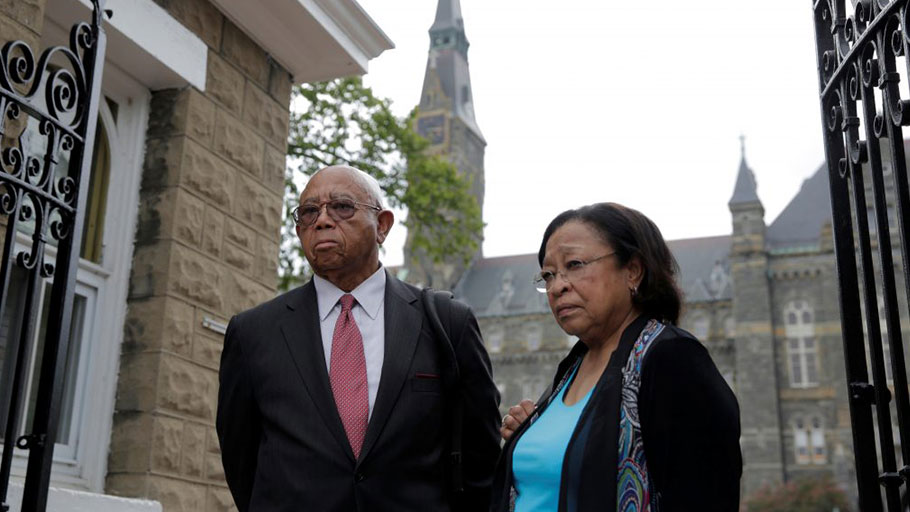 Left: Joe Stewart and Patricia Bayonne-Johnson, both descendants of people sold as slaves by Georgetown University, arrive to hear about moves aimed at acknowledging and encouraging dialogue about the Jesuit-run university’s ties to slavery in Washington, D.C., on Sept. 1, 2016. Photo by Joshua Roberts/Reuters

The UN Working Group of Experts on People of African Descent said that compensation is necessary to combat the disadvantages caused by 245 years of legally allowing the sale of people based on the color of their skin.

The U.N. group warned that the U.S. has not confronted its legacy of “racial terrorism.”

The report, which is non-binding, specified that reparations can come in a variety of ways, including educational opportunities, psychological rehabilitation, debt cancellation and formal apologies

Some institutions have started to take these steps. Georgetown University announced earlier this month it would offering free tuition for descendants of the 272 slaves that were sold in 1838 to help pay the university’s debts.

The U.N. report also linked past injustices to recent police killings of black men that have sparked protests across the U.S.

“Contemporary police killings and the trauma that they create are reminiscent of the past racial terror of lynching,” the report said.

The U.S. created a reparations plan in the immediate aftermath of the Civil War that stated that freed families would be granted “forty acres of tillable land” and a mule from the Union Army. The plan, proposed by Union General William T. Sherman after meetings with black community leaders in Savannah, Georgia, was reversed by President Andrew Johnson and the land was returned to plantation owners.

NOTE: This article was originally published on here on the PBS website (PBS/Nation) on September 29, 2016.