You Are Here: Home » Commentaries/Opinions » Cynthia Nixon called marijuana licenses a “form of reparations” for black people. Not exactly. 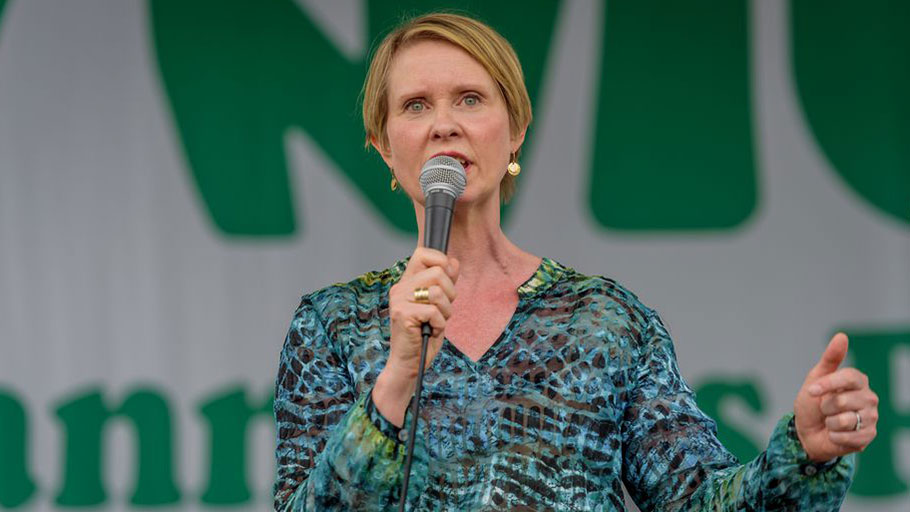 New York gubernatorial candidate Cynthia Nixon speaks at the NYC Cannabis Parade and Rally on May 5, 2018. Nixon has been criticized by black leaders for saying that marijuana licenses could be a “form of reparations.” Photo by Erik McGregor, Pacific Press, LightRocket via Getty Images

New York gubernatorial candidate Cynthia Nixon is facing criticism after suggesting that giving black people access to marijuana licenses could serve as a “form of reparations” for black communities.

The controversy started after Nixon, who is challenging current Gov. Andrew Cuomo in the state’s upcoming Democratic primary, appeared at the NYC Cannabis Parade on May 5. After the event, she told Forbes in an interview that she saw legalization as part of a broader effort to reverse the damage of the war on drugs, a campaign that disproportionately targeted African Americans.

“Now that cannabis is exploding as an industry, we have to make sure that those communities that have been harmed and devastated by marijuana arrests get the first shot at this industry,” Nixon said. “We [must] prioritize them in terms of licenses. It’s a form of reparations.”

Her reference to reparations — a term that usually refers to a form of economic payment to black Americans for generations of slavery, racial terrorism, Jim Crow, and unequal opportunity —didn’t go over well.

Black Lives Matter of Greater New York demanded an apology from Nixon, calling her comments “offensive and ignorant,” and said that they played into “harmful stereotypes of African-Americans as drug users and dealers.” Rev. Al Sharpton tweeted that “putting pot shops in our communities is not reparations,” before adding that increased access to health care and education were better alternatives.

Manhattan Democratic Party Chair Keith Wright weighed in as well, telling the New York Daily News that Nixon’s comment “lacks understanding of the greatest crime in history.” Nixon should have kept her comments to whether or not she was for marijuana legalization, he said, adding, “it is insulting to my soul that the free labor that my ancestors gave to this country would be equated with the selling of marijuana.”

After the backlash, Nixon tried to clarify her comments. “There’s no way legalizing marijuana would be a remedy for the legacy of slavery & Jim Crow,” she said in a tweet on Monday. “But when it comes to repairing the wrongs of a racist drug war, we’ve got to make sure black and Latino communities are prioritized in the new legalized industry.”

Reparations would require a massive investment in black America

To understand the reaction to Nixon’s reparations reference, it’s good to keep in mind some basic facts about the concept.

Reparations have long been part of the American conversation about slavery and how best to account for its enduring effect on black people. By acknowledging this legacy, and by making significant and systemic investments into black communities, the argument goes, the US can start to amend for stealing the free labor that built America.

Economists say that enslaved people were denied between $3 billion and $6.4 trillion in wages, depending on the numbers used, inflation, and if interest is included in the figure.

Atlantic writer Ta-Nehisi Coates pushed this term further into the mainstream, arguing in a landmark essay in 2014 that reparations should not only include repayment for slavery but also account for the damages of an additional century of legal discrimination under Jim Crow, as well as the continued effects of policies, both official and unofficial, that denied black people access to the same things as whites.

Between the redlining that cut black people out of the home mortgage market, forcing them to pay more to live in poor residential areas, the segregation that kept them in impoverished schools, and the lack of access to the loans and federal funding that made it easier for white Americans to build wealth after World War II, Coates argues that America has systemically denied black Americans an opportunity to build wealth. And the effects of this continue to be felt today.

“People don’t want to believe that they got their gains in an ill manner,” Eric Miller, a professor at Loyola Law School, told the Huffington Post in 2014. “The cognitive dissonance of learning that your property is got and preserved on the back of the misery of others is not an incredibly nice thing to live with. So people would rather discount it.”

Centuries of injustices against blacks in America, starting with slavery, followed by decades of lynching, Jim Crow, redlining, employment discrimination, and other barriers, would require an expansive correction, one that could not be made through access to the marijuana industry alone.

This is not to say that Nixon doesn’t raise a valid point. Racial justice advocates and civil rights groups have pointed out that with the rise of legalization, marijuana is becoming the next big industry for white entrepreneurs, leaving people of color behind. In 2017, the marijuana industry brought in some $9 billion, a figure that could rise to $21 billion by 2021, according to CNN.

And groups like the Drug Policy Alliance note that while legalization is making marijuana more accessible for white people, it hasn’t erased the disparities between black and white people when it comes to arrests. Policies that bar public consumption of marijuana, ban marijuana sales, and prohibit marijuana use for people under 21 all contribute to people of color continuing to be arrested even where marijuana is legal. And while marijuana becomes more easily accessible and legal to use, there’s still the matter of what happens to the people arrested prior to legalization.

There are actually programs in place that do something similar to what Nixon is suggesting. In 2016, the city council in Oakland, California, launched a program that prioritizes people of color from communities harmed by the war on drugs when issuing marijuana licenses.

Nixon is right that marijuana reform and access to the marijuana industry has the potential to particularly benefit the black communities that have been affected by the war on drugs. But to call increasing access to marijuana licenses reparations doesn’t fully capture the scale of the problem reparations seek to address — a problem that goes much further than a single industry.