‘This Is Historic’: Why the Van Dyke Guilty Verdict Is a Victory For the Movement For Black Lives

You Are Here: Home » Commentaries/Opinions » ‘This Is Historic’: Why the Van Dyke Guilty Verdict Is a Victory For the Movement For Black Lives 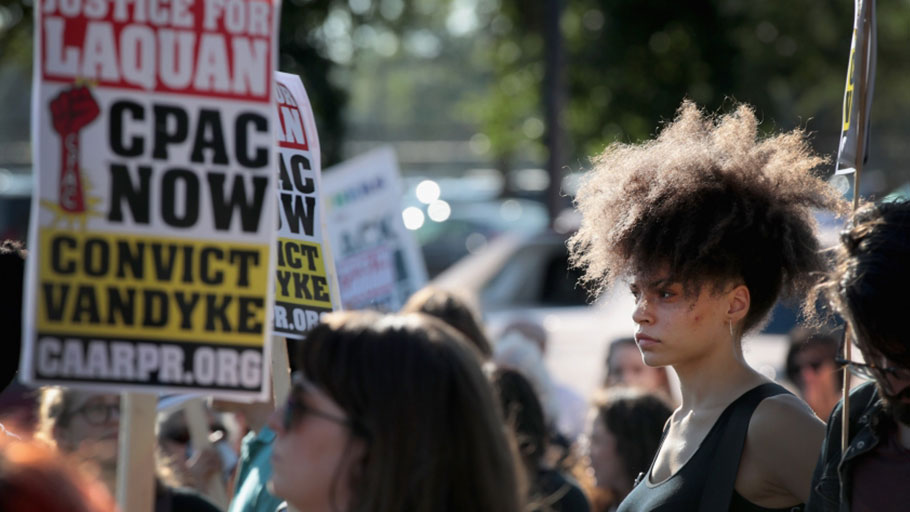 By Miles Kampf-Lassin, In These Times —

“We are far from done. This is the beginning and we should use this momentum to keep going forward.”

Chicago has long been a city on the brink. Decades of racial stratification, disinvestment, segregation and endemic poverty have left large swaths of the population struggling to survive, while new development has disproportionately favored wealthier residents.

The communities left behind by this process are largely Black and Brown, while the beneficiaries are primarily white. Such a system of racial inequity is upheld by a police force that has long been known for both its brutality and racism.

Today, that system of policing was put on trial. Chicago Police Department (CPD) officer Jason Van Dyke was found guilty of second-degree murder and 16 counts of aggravated battery for killing Black teenager Laquan McDonald in 2014. Following a 3-week trial, the jury announced its decision on Friday, capturing the rapt attention of Chicagoans across the city.

The killing of McDonald catapulted into national headlines after the release of a video showing Van Dyke unloading 16 gunshots into the 17-year-old on a Southwest Side street. After Mayor Rahm Emanuel’s reelection in 2015, allegations surfaced that the video had been suppressed ahead of that year’s mayoral contest, and Emanuel, along with the CPD, was accused by racial justice organizers of overseeing a cover-up.

In the aftermath of the video’s release, activists staged massive protests across the city, shutting down major business districts and thoroughfares. Soon after, then-Police Chief Garry McCarthy was fired by Mayor Emanuel. And later, States’ Attorney Anita Alvarez lost a high-profile election to reformer Kim Foxx. Last month, Emanuel announced that he will not be seeking re-election for a third term, meaning that the three most prominent officials associated with the alleged cover-up will soon no longer sit in their previous positions of power.

Now that Van Dyke has been found guilty, many organizers in the city are taking the verdict as a call to action—and an opportunity to show their opposition to a policing organization that systematically devalues the lives of Black and Brown residents.

I spoke with Aislinn Pulley, an organizer with Black Lives Matter Chicago, about why she sees the verdict as a victory, how she thinks the movement will respond, what it says about Chicago’s policing system and more.

What’s your reaction to the verdict?

AP: This is historic. This is a historic moment for the city. It’s a historic moment for this country. And this is the culmination of organizing by thousands and thousands of people, including families who have been at the front lines, demanding justice for their children, their family members and their loved ones who have been killed by police that have received zero accountability.

So, this is the first step in reversing and putting a stop to the continued systemic impunity that has reigned supreme in this city and in this country.

Are you satisfied with how the jury ruled?

AP: It should have been first-degree murder, so I’m not going to say I’m satisfied 100 percent. But this is a win. This is definitely a win.

What does the trial itself says about our justice system and how black youth are treated versus police officers?

AP: The trial was a perfect snapshot of the dehumanization that is standard in policing of urban poor black youth. Laquan McDonald was born into the system—he was a foster kid. He had to exist within a city that has divested from black children, from the closing of 50 Chicago public schools—at the time the largest school closing in U.S. history—to the closing of half of the city’s mental health centers, to the closing of affordable housing. These are the conditions that McDonald lived under, with the CPD functioning as an occupying force.

Jason Van Dyke’s narrative of Laquan McDonald as needing to be caged; his defense attorney’s reference to Laquan as a “monster”; Van Dyke’s claim that McDonald’s eyes were bugging out—it’s the same superhuman, animalistic narrative that Darren Wilson in Ferguson gave of Mike Brown. That is how the police operate—as if they’re having to herd animals in a zoo. They do not see our humanity. And so the trial exposed that. It exposed what we have lived with as normal for all of our lives here in Chicago.

How did the role of economic inequality play into this case, and in general to policing in Chicago?

The War on Drugs and mass incarceration involved militarizing police forces. The results are disastrous. It’s human rights violation after human rights violation. It’s creating an environment of extreme hostility and terror. John Burge tortured over 100 Black and Latino men, women and children. But he is only one person.

How do you think the killing of Laquan McDonald fits into the broader system of institutional racism?

And what is an armed individual going to do when a person is in a mental health crisis? That absolutely is anathema to giving him the care that they need. So instead of there being an intervention and providing him with the healthcare that he needed, he was seen as a threat to society and was murdered.

How do you expect movement organizers to respond to this verdict?

AP: We have to move forward. This is not over. There has to be full accountability. Rahm Emanuel hid the video. He should be held accountable for that. The former superintendent of police, Garry McCarthy, was complicit in that hiding. Every single alderperson who voted to approve that payout and cover-up is complicit and needs to be held accountable. We have an aldermanic election coming up, they need to be voted out.

We know that although this is one officer that has been charged, we still have Homan Square, we still have Glenn Evans, we still have the countless unnamed Burges that exist. We still have a city budget that prioritizes policing over everything else, where 40 percent of the budget is allocated to policing. So we are far from done. This is the beginning and we should use this momentum to keep going forward.

What do you think would bring justice for Laquan McDonald and all the victims of police brutality in Chicago?

Do you see the movement for community control of the police fitting into that vision?

AP: Yes. CPAC (Civilian Police Accountability Council) requires extreme divestment in policing and a redistribution of power. It requires the empowerment of the people and of the community to take control over who is allowed to patrol our neighborhoods—and how. And it empowers us to be the ultimate arbiters of determining what kind of police force we want and we need. If we can turn what we currently have into something that could actually help people in crisis, then that’s what we should do. CPAC enables the community, it enables the people to have that power.

Are you hopeful for the future of seeing real racial justice in Chicago?

What message do you want young organizers to take from this verdict?

AP: I want them to take this as evidence that when you fight and you organize, you win. And that this is one small step towards police and prison abolition and one small step toward eradicating the system of police impunity that we have. And in order to achieve what we really want, which is no more Laquans, we have to keep fighting.

Miles Kampf-Lassin, a graduate of New York University’s Gallatin School in Deliberative Democracy and Globalization, is a Web Editor at In These Times. He is a Chicago based writer. miles@inthesetimes.com @MilesKLassin

America must atone with reparations for our legacy of slavery

America must atone with reparations for our legacy of slavery
We Need Your Support — Donate, Share, Sign-Up Ways to Support