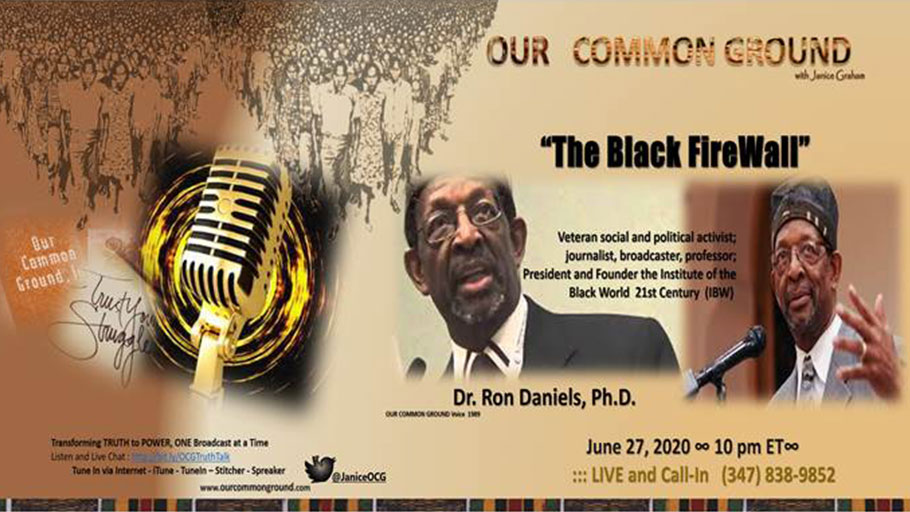 Veteran social and political activist Dr. Ron Daniels was an independent candidate for President of the United States in 1992. He served as Executive Director of the National Rainbow Coalition in 1987 and Southern Regional Coordinator and Deputy Campaign Manager for the Jesse Jackson for President Campaign in 1988.

Founder and President of the Institute of the Black World 21st Century (IBW), a progressive, African centered, action-oriented Resource Center dedicated to empowering people of African descent and marginalized communities. As the administrator for the National African American Reparations Commission (NAARC), NAARC supports HR-40, the Congressional Bill that would establish a National Commission to study reparations proposals for African Americans. Dr. Ron Daniels serves as the Convener of NAARC and is lead co-author of its 10 Point Reparations Program.

About Our Common Ground

OUR COMMON GROUND with Janice Graham is URBAN PROGRESSIVE independent talk radio examining global and community issues, events, thought, ideas and perspectives in and about the African-American community. OUR COMMON GROUND features guests who bring new ideas, creative and innovative solutions and opportunities.

This provocative and intriguing talk radio experience examines our world and nation, the socio-economic condition of our community and collective interests in the context race in HOPE and COURAGE.

Rock Newman Show, May 9, 2019 — With reparations, gentrification, issues like the Mueller Report and rising calls for president Trump’s impeachment making headlines. We’ll share an illuminating discussion of the “Politics of the Unusual” with political scientist Dr. Ron Daniels, president of “The Institute of the Black World 21st Century”.

Malveaux! May 18, 2019 — Dr. Ron Daniels is an activist who brings people together about issues like reparations, gentrification, resistance to white supremacy. He does it under the banner of the Institute for the Black World, which he leads We also discuss NAARC, the National African American Reparations Commission.