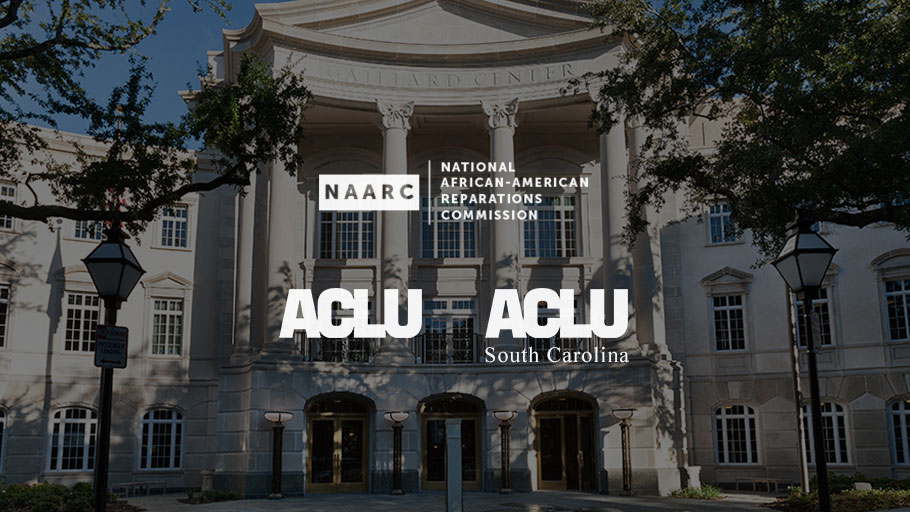 You Are Here: Home » Blog » News & Current Affairs » Events » NAARC and ACLU to Host Series of Forums Focused on Reparations

The National African American Reparations Commission (NAARC) and the American Civil Liberties Union (ACLU) will host the second event in a series aimed at furthering the passage of H.R. 40. Co-sponsored by Ben & Jerry’s Ice Cream, it will take place at the historic Gaillard Center in Charleston, SC.

The South Carolina event will serve as the follow-up to the first event in Washington, D.C., on Juneteenth, held immediately after Congressional hearings on the subject. The series is being convened in conjunction with a dramatic surge in interest and support for H.R. 40, legislation introduced by Congresswoman Shelia Jackson Lee that would establish a commission to examine the institution of slavery and its legacy and make recommendations for reparations to Congress. NAARC and the ACLU selected Charleston due to the city’s deep relationship to slavery, along with its connection to vibrant African American institutions and communities. Future forums for 2020 will be announced later in the year at locations with similar historical significance.

“NAARC welcomes the opportunity to partner with the ACLU to create greater public awareness about H.R. 40 and the necessity of reparations to repair the harm inflicted on Black people by enslavement and post-emancipation racially exclusionary policies” said Dr. Ron Daniels, Convener, National African American Reparations Commission. “Reparations are not just about a superficial payment to Black people, it’s about remedies that will heal Black communities as a whole.”

In May of 2019, the ACLU formally announced the support of reparations to African Americans for the practices and vestiges of slavery.

“Our country was built on the polluted bedrock of slavery. We will not be at our strongest until that pollution is fully understood and cleaned, and our system of democracy repaired,” said ACLU deputy legal director Jeffery Robinson. “The type of detailed study proposed in H.R. 40 has never been done, and it remains the only mechanism to fully achieve a fair and just solution on the issue of reparations.

Among other esteemed leaders, participants include:

The event is free and open to the public.

Media interested in covering should RSVP to Brandon Cox, bcox@aclu.org.

The ACLU’s blog series on reparations is online here: http://www.aclu.org/reparations