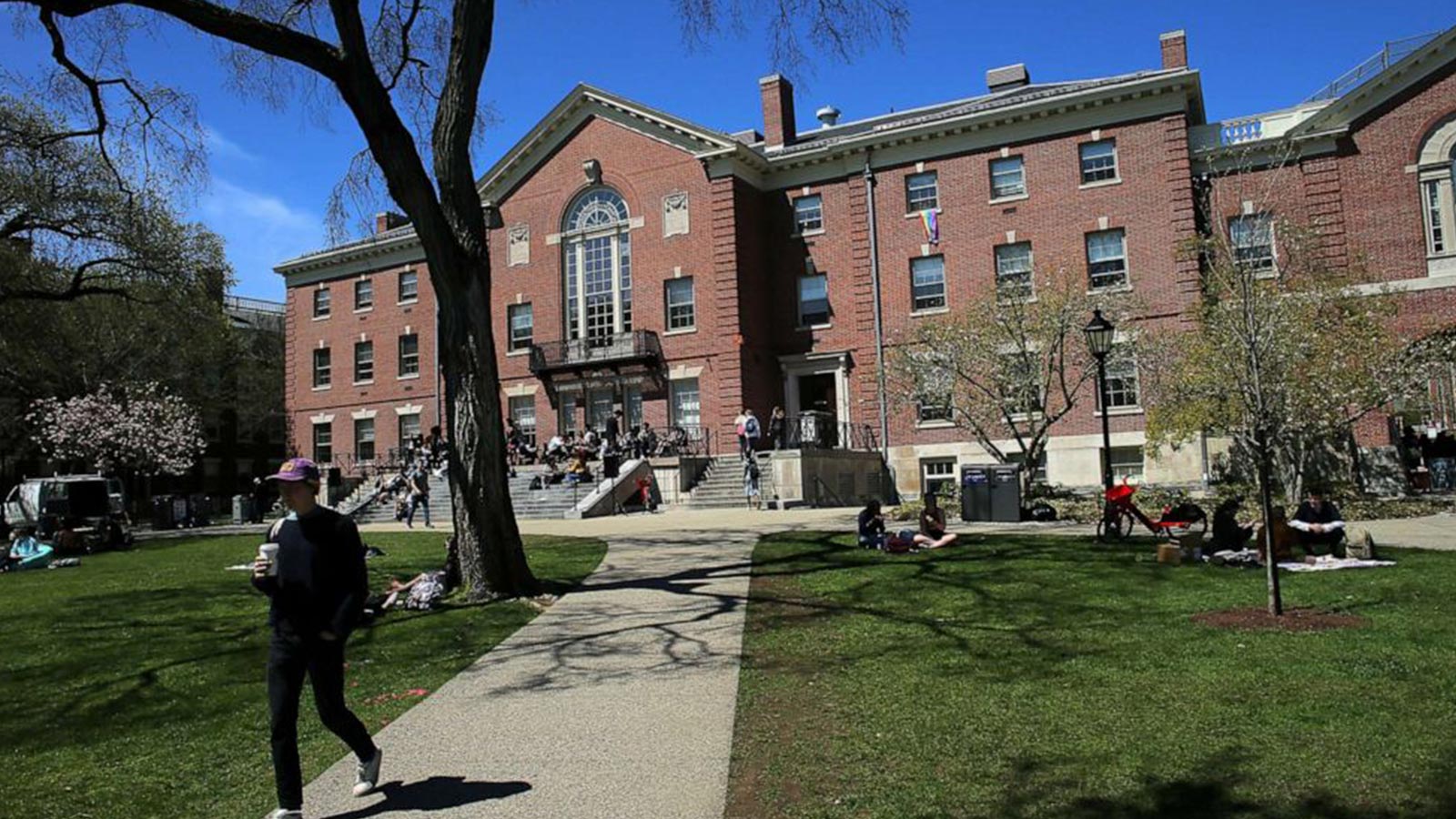 Over 95 universities are officially studying their ties to slavery.

Universities across the country are studying their relationship to slavery and are being called on by students to address their histories by making symbolic and financial reparations.

During the colonial era the wealth of universities, in the form of endowments and benefactors, was inextricably tied to the slave trade, numerous university presidents owned enslaved people and famous alumni such as John C. Calhoun championed the cause of slavery. Enslaved people were owned by universities and worked on campuses until the abolition of slavery.

Now, students at those institutions are organizing. They are focusing on erecting monuments, taxing endowments, creating divestment campaigns and offering alternative campus tours that highlight the university’s history of slavery. Students are also pushing schools to identify and support descendants of people enslaved by the universities.

At Brown University in Providence, Rhode Island, senior Carina Sandoval was “really hopeful” when she cast her ballot last year in the student referendum, which asked students whether they thought the university should make efforts to identify descendants of people enslaved by the institution and make some form of reparations to them.

More than 80% of the student body said yes to both measures, yet Sandoval said the university did not respond.

“A number of my co-organizers and I have been increasingly disillusioned with the referendum process, as it feels like a stalling tactic by the university,” Sandoval told ABC News. “In any case, it’s made it clear that campaigning exclusively within the university alone is ineffective.”

“We always welcome the opportunity to engage in a direct and positive dialogue with students, and the question of reparations remains an important one that will continue to prompt exploration on campus,” a university spokesperson said in a statement provided to ABC News.

Sandoval and more than a dozen other students are part of a group called “Coalition for University Accountability,” which formed two years ago with the goal of educating students about the history and legacy of slavery at the university and passing two bills in the city government, both of which would tax the university.

One bill would allow the city to tax the university’s property “notwithstanding any charter provision,” because the university is tax-exempt in the state constitution.

A Boston Globe analysis found that taxing Brown’s properties would give the city an estimated $48 million annually.

Another bill would enable the city to tax the university endowment, which is $6.9 billion, at a maximum rate of 2%. The bill also states that the revenue can “be used only for the host’s public school district.”

Gabe Mernoff, a senior at Brown who grew up in Providence and is a member of the “Coalition for University Accountability,” said the idea of taxing the university specifically is something “you hear about all the time from people” in the city.

“We want Brown to not only be a good neighbor, but a neighbor that actively uses its resources and its vast wealth to promote social justice in Providence and Rhode Island,” said Mernoff.

“[It’s] wealth originally has been built on injustices like slavery and other forms of exploitation in subsequent centuries and today it’s gentrifying a lot,” he added.

A spokesperson for the university said in a statement, “Brown continues to believe that taxes imposed through legislative efforts impede the efforts of higher education institutions,” adding that “legislative efforts such as these tend to overlook that Brown provides extensive contributions to the community we call home in significant areas that meet public need and offset the need for greater public resources.”

On other campuses, student organizing has focused on increasing the payments many universities make voluntarily to local municipalities to compensate for the university’s tax-exempt status. These payments, called PILOT, or payment in lieu of taxes, represent a small fraction of what they would presumably “owe.” 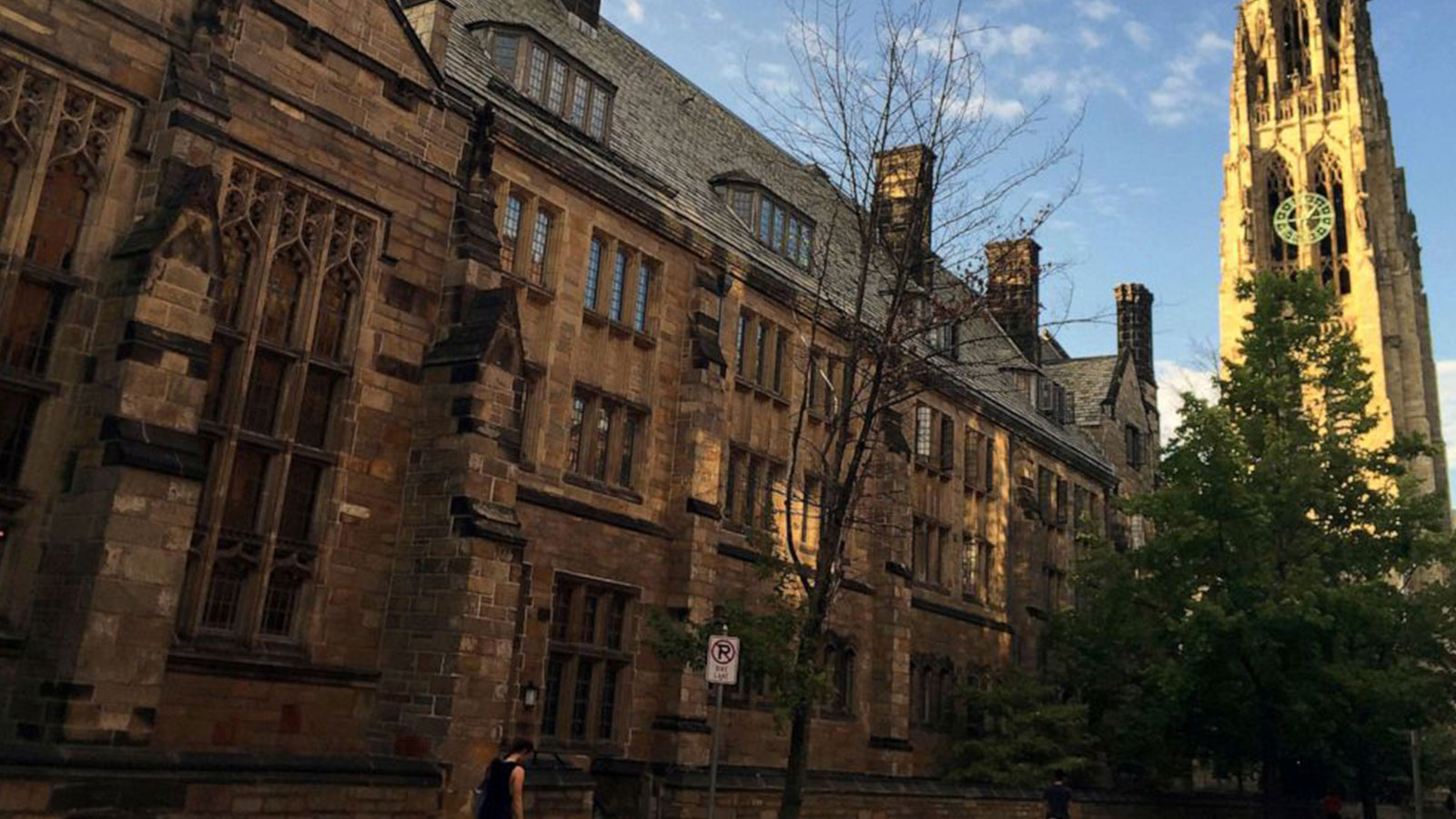 Last year, Yale University agreed to increase its annual PILOT payments, which were approximately $13 million, by $10 million over the next five years.

“When you’re facing a 40-plus billion-dollar multinational corporation, it takes a lot of power,” said Sharif. “Our community was building that power and applying that pressure, but we also needed those allies on the inside.”

A spokesperson for the university issued a statement saying, “for decades, Yale has regularly increased its voluntary payments to New Haven. Our most recent increase is the largest yet,” adding that “these contributions reflect the continued evolution of our strong commitment to, and partnership with, our hometown.”

The most recent data published by the Lincoln Institute of Land Policy shows that 70 universities across the country make PILOT-type payments.

Another strategy that is being used by student organizers is calling for universities to divest endowments from certain industries.

At Harvard University, where the administration recently announced a $100 million reparations fund, student and community organizers have been focused on getting the university to divest from the prison industry.

The Harvard Prison Divestment Campaign filed a lawsuit against the university in 2020, alleging that the university had engaged in “untrue and misleading advertising” because “at the time that President Drew Faust publicly [sic] promised to understand and address [sic] Harvard’s complicitly [sic] with slavery, Defendant Harvard Corporation was invested in and profiting off of the continued enslavement of mostly Black and brown peoples in prison,” the lawsuit reads. 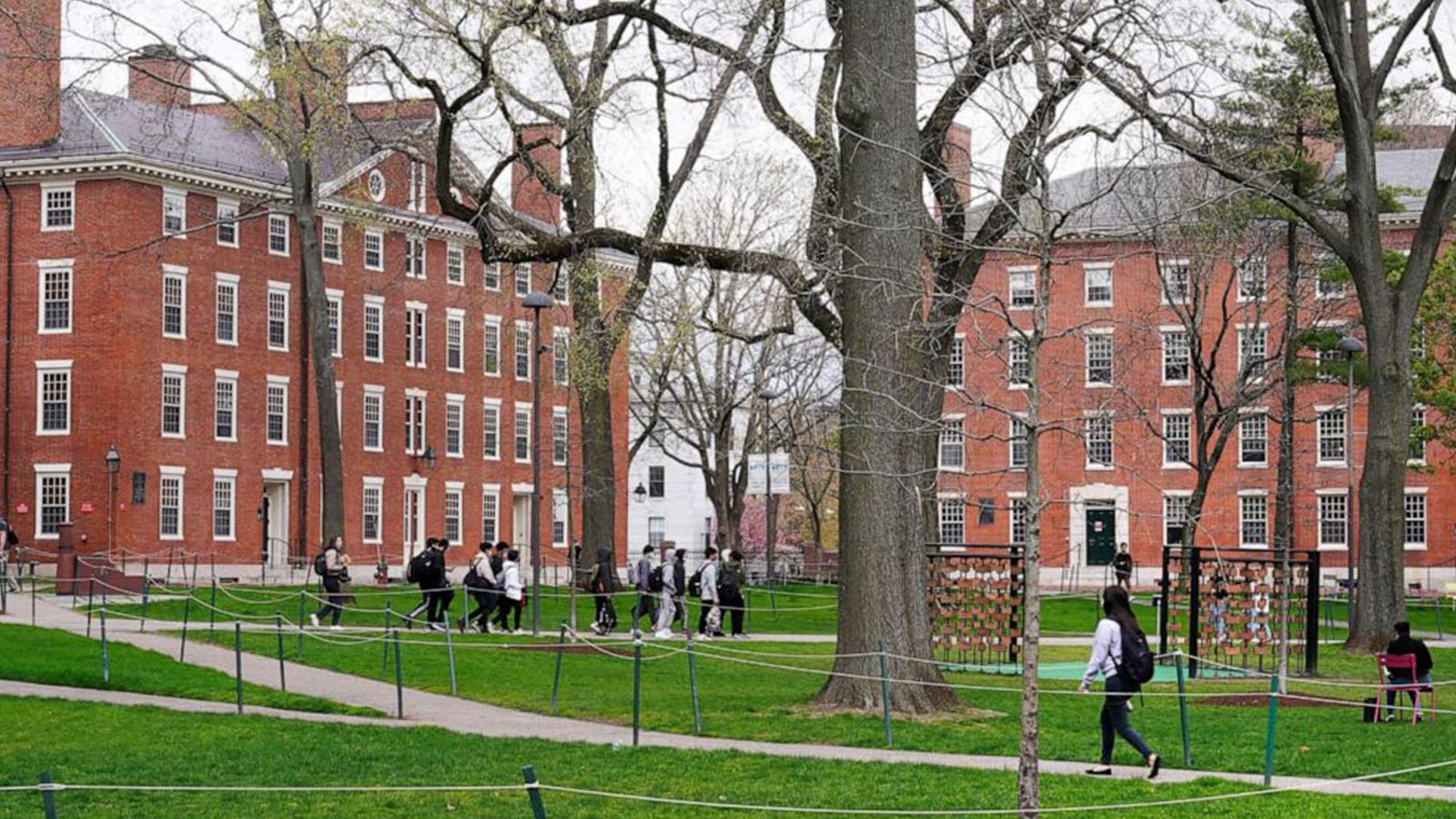 The case was dismissed last year, with the court deciding that the six Harvard students who filed the lawsuit “lack[ed] standing to challenge the investment decisions at issue in this suit.”

In the most recent update from the Harvard & the Legacy of Slavery implementation committee, Harvard professor and committee chair Martha Minow said, “we are immersed in listening to many people, gathering ideas, and moving ahead on the task of advising the president and other senior administrators, and developing suggestions for further work.”

A spokesperson for Harvard University declined a request from ABC News to comment specifically on the subject of divestment.

“Universities typically dramatically overstate the limitations on what they can use their endowments for,” said Charlie Eaton, professor of sociology at the University of California, Merced, and author of “Bankers in the Ivory Tower.” “If the university has a will to use its endowment toward racial equity it will,” said Eaton.

In 2015, both Columbia University and the University of California system announced they were divesting their endowment from the private prison industry. 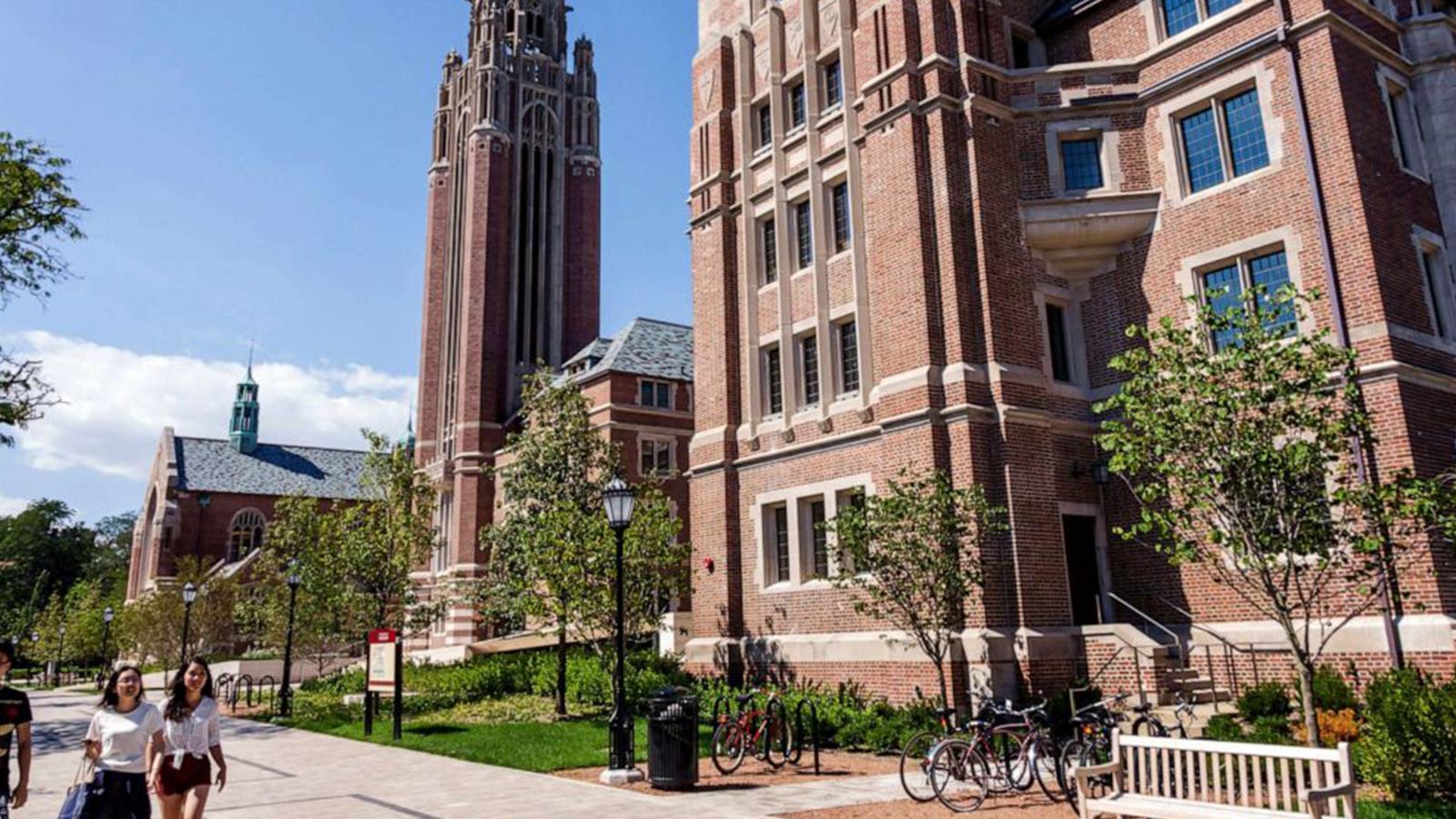 Current and former doctoral students have sought to highlight the link between the current organization, wealth and status of the University of Chicago and what is called the “Old University of Chicago,” which was founded by Illinois senator and slave owner Stephen A. Douglas, making the case that Douglas’ original endowment, generated from enslaved laborers, made the university possible.

“The University of Chicago that exists today was founded in 1890,” the spokesperson for the university said. “The earlier university was founded by Douglas in 1856 and financially collapsed in 1886, with no endowment and its land and buildings foreclosed by creditors.”

The student organizers, calling themselves “University of Chicago Against Displacement,” also have joined with community organizations to demand a community benefits agreement, a legal contract between a real-estate developer and organizations representing residents, from the city of Chicago.

The focus of the coalition is preventing gentrification and displacement they say will be caused by building of the Obama Presidential Library in the South Side, which is currently under construction.

The city of Chicago did not respond to repeated requests from ABC News for comment.

Universities have published reports on their own historical ties to slavery comprising hundreds of pages, and Georgetown University has begun offering special consideration in the admissions process to descendants of enslaved people owned by the Maryland Province of Jesuits after the university officially apologized in 2017 for the sale of 272 enslaved people in 1838 to fundraise for the school.

In 2019, Georgetown students voted to create a reparations fund that would serve the descendant community. The school responded by creating a reconciliation fund, which receives minimum funding of $400,000 a year and is dedicated to “support[ing] community-based projects to benefit the Descendant community,” a spokesperson for the university said. It has also funded a charitable foundation, run by a board that includes descendants.

“We are committed to continuing to understand and respond to our involvement in the institution of slavery and ensure that our community members engage with this history and work toward racial justice,” the spokesperson added. 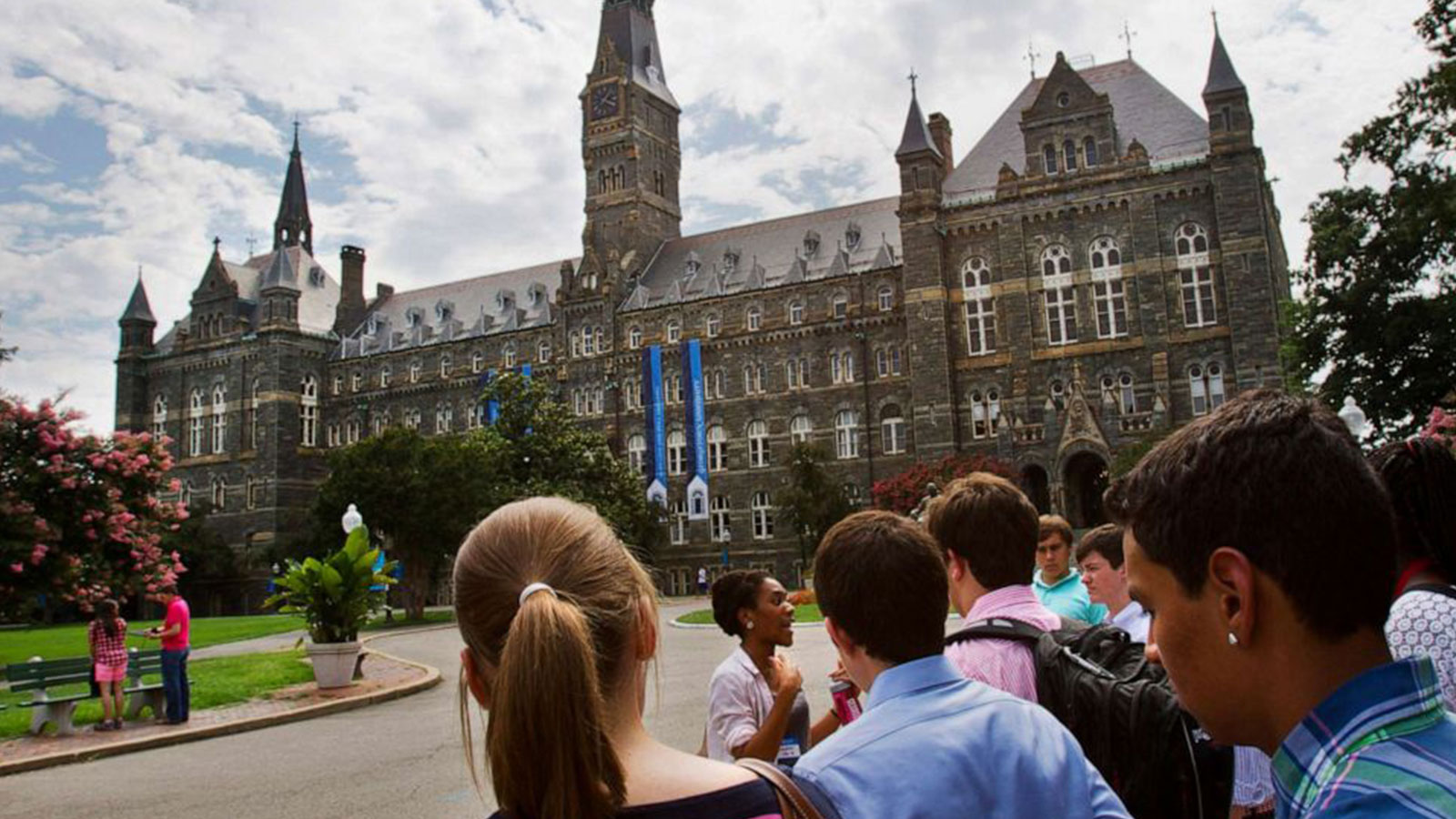 “There is a tradition among students going back, at least to the 1960s, of promoting racial justice,” said Robert Cohen, professor of History and Social Studies Education at New York University. “This issue of reparations, and [reckoning with the] history of slavery on the university campus, is consistent with that.”

Henry is involved with organizing a school supply drive for Maringouin, Louisiana, where many of the descendants live, coordinating teach-ins for fellow students to learn about Georgetown’s history, and advocating for the construction of a memorial on campus.

“The reparations are not meant to be in any way, shape or form a cop-out for meaningful engagement with the descendant community. They are a part of Georgetown and if they want access to Georgetown’s resources that should be part of their disposal,” said Henry.

“It takes sending that first message [to descendants], and just kind of hoping that people respond. And if they don’t, there’s no requirement for people to talk to me,” said Henry. “But I’m trying to have that door open.”