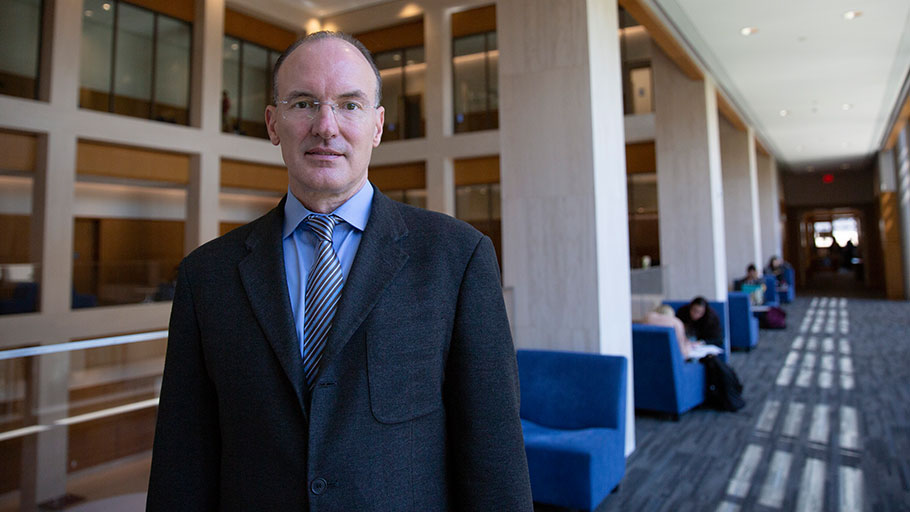 One Professor’s Journey to the Past Through Reparations

You Are Here: Home » Blog » Reparations » One Professor’s Journey to the Past Through Reparations

Last month, Georgetown University’s undergraduate students voted in favor of a referendum to voluntarily charge each student a fee to be paid into a fund benefiting the descendants of enslaved people that the university sold to save itself from financial ruin in the 19th century.

The move came in response to the university’s lack of action on the recommendation of its own Working Group on Slavery, Memory, and Reconciliation to make a “meaningful financial commitment” to the descendants, says Thomas Craemer, professor of public policy in the College of Liberal Arts and Sciences.

The student vote was a historic moment, he says.

“To my knowledge it is the first time in American history that members of a slavery-related organization have taken it on themselves to voluntarily contribute towards reparations for the direct descendants of the enslaved,” says Craemer, who is an expert on implicit racial bias — prejudices that subconsciously afflict nearly everyone, regardless of race.

As the national dialogue on slavery reparations ramps up with presidential candidates jockeying for standing among voters, Craemer says he hopes the conversation remains in the mainstream.

Reparations are not just for those who suffered, says Craemer. “I feel reparations have benefits for both sides – for the givers and the receivers.”

Craemer’s motivation to investigate implicit racial bias stems from his German heritage, within which he struggled deeply with his country’s history of Nazi racism.

“As a child, I thought, how was it possible that in such a short time, people went completely berserk?” he says. “As much as I loved my grandmother, I really doubted that she didn’t know” about the Nazi concentration camps, he notes.

In 2001, he and family members traveled to a concentration camp memorial site with a Holocaust survivor who had lost his family there.

“That spiritual journey was one of the deepest experiences of my life,” Craemer says.

For decades, that Holocaust survivor had received a reparations pension, worth about 1,200 Euros a month in 2015, from the German government. While it’s not a lot of money for each survivor, that gesture, says Craemer, signaled that the country was trying to make amends for its behavior in a concrete way.

Craemer’s heritage drives his research. He was interested in how implicit biases toward groups influenced their opinions on policy issues, like affirmative action, government aid to minorities, and reparations for slavery.

To understand non-conscious bias, Craemer uses both survey research and reaction time tasks. For example, a subject in his studies might be asked to categorize words as good and bad, and people according to their race, as fast as they can. Quicker or slower responses can indicate the extent a person associates positive meaning more with, for example, European Americans than with African Americans.

Most Americans oppose the idea of federal reparations to descendants of enslaved people but Craemer’s research has found that it depends on what kind of reparations are proposed. More people would support educational benefits rather than cash payments or mere apologies, he said.

He also found that anti-black implicit bias is not the whole story behind opposition to reparations. Some white respondents who have anti-black association biases, for example, could still feel solidarity with black people – also at the implicit level – and support reparations.

“Those results seem to suggest that we don’t have to wait until the time that anti-black implicit biases disappear [from society],” Craemer notes. “Solidarity can come about through different psychological mechanisms.”

In 2015, Craemer took a new direction with his work, in which he estimated the value of slavery in the United States at between $5 and $14 trillion. The often-cited statistic uses a different approach from most previous economic models, which calculated the benefit of the work performed by enslaved people to their owners. Instead, he calculated the cost of slavery to the enslaved people themselves.

“What the slave owner gained was only the 10 or 12 hours that the slave worked per day,” Craemer says. “But the enslaved lost all 24 hours of the day.”

Then, in 2017, the GU272 Isaac Hawkins Legacy – a legal team representing 200 direct descendants of the 272 enslaved people Georgetown sold in 1838 – asked Craemer to calculate the value of their ancestors’ claim to the university. The descendants used Craemer’s dollar amount, which is confidential, to inform a request for restitution submitted to Georgetown leadership.

After receiving no formal response from Georgetown officials, in 2018 the GU272 Isaac Hawkins Legacy held a news conference at the National Press Club asking Georgetown to make amends.

Independent of the group’s demands, Georgetown has taken steps toward restitution, including granting all descendants’ families legacy status in admissions, which can help them be admitted as students if they are qualified. They also perform outreach with the Washington, D.C. black community and have formed a research center on slavery.

However, outreach and research components “are things that a modern research university should be doing anyway,” Craemer says. “Georgetown really needs to come up with something that benefits the direct descendants.”

With a response from Georgetown still absent, the university’s undergraduates pursued the successful referendum to charge each student $27.20 per semester in reparations to benefit the direct descendants of the GU272.

“I hope Georgetown University’s administration will not only implement the student’s decision, but will follow their bold example and contribute towards addressing the living conditions of the direct descendants of GU272 many of whom still suffer from the lingering legacy of slavery,” says Craemer.