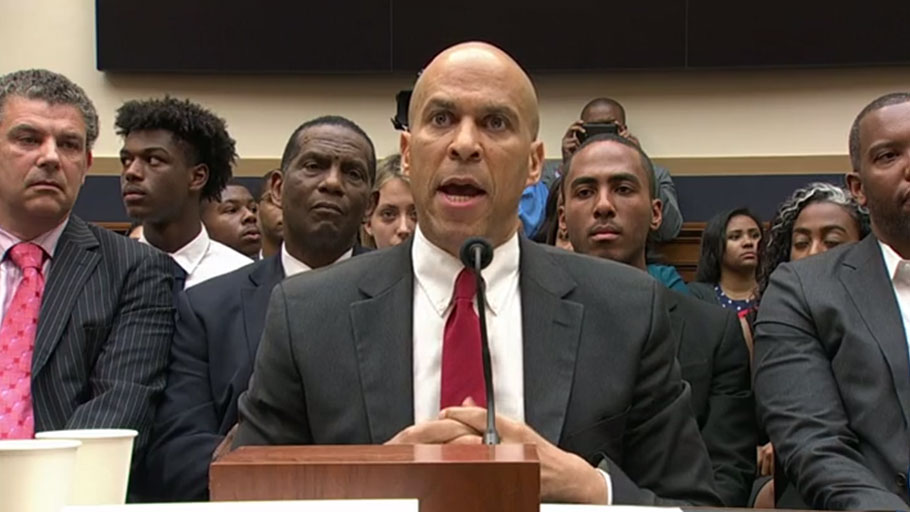 Lawmakers on Wednesday held the first congressional hearing in more than a decade on reparations, spotlighting the debate over whether the United States should consider compensation for the descendants of slaves in the United States. (June 19) AP — See full hearing here

WASHINGTON – Calling racism the “poison of America,” Senate Democratic leader Chuck Schumer gave his support Tuesday to a bill to set up a commission to study reparations.

“The disparities in race affect everything, not just the obvious things, but the non-obvious things” like pollution and climate change, Schumer explained.

The bill, proposed by Sen. Cory Booker of New Jersey and Texas Rep. Sheila Jackson Lee would form a commission to study ways to make an apology for slavery and make payments to the descendants of slaves. Booker and Jackson Lee introduced the measure in April 2019.

“The legacy of slavery and Jim Crow are still with us,’’ Schumer told a small group of reporters in the U.S. Capitol.

The bill’s opponents argue the cost would be too high, and that present-day Americans are too far removed from slavery, which was ended by the passage of the 13th Amendment in 1865, to be held responsible for its consequences.

Its chances of passage are low, but the idea has recently entered the political mainstream. Several Democratic presidential candidates have backedsome form of reparations or the study of ways to implement reparations, including Booker, Sen. Elizabeth Warren, Sen. Kamala Harris, and Marianne Williamson. Every single member of the Senate who is currently running for president has signed on to co-sponsor the Senate’s version of the legislation.

Senate Majority Leader Mitch McConnell has opposed reparations, telling reporters on June 19 that reparations were not a “good idea” “for something that happened 150 years ago, for whom none of us currently living are responsible.” According to McConnell, the United States had tried to solve the “original sin of slavery” by, among other things, electing an “African American president.”

Schumer said he doesn’t think many understand that slavery was not that far in the past. The proposal, he said, would also include recommendations.

Schumer said he hopes its similar to the Warren Commission, which was set up to investigate President John F. Kennedy’s assassination.

He said he hopes more senators sign on to the bill.

The issue, however, is not new. Former Rep. John Conyers, a Detroit Democrat and civil rights advocate, had proposed a reparations bill in every session of Congress since 1989. Civil rights activists have long called for an apology for slavery and the long-promised “40 acres and a mule.”

Schumer said, however, he thinks the consciousness of America has shifted.

“I think slavery has become not just a historical phenomenon, but something that more and more people realize America — white and black — live with every day,’’ he said. “That’s what’s changed.”

“The biggest thing to overcome is to say this didn’t happen back then it’s still happening now and that leads… legislators and American people to say, We’ve got to do something.’’

Schumer said he’s going to wait for the commission results to decide what solutions are best. “I’m not the expert on this,’’ he said.

He said he has tried to address racial inequalities, including supporting legislation that would decriminalize marijuana. The measure is proposed by New York Rep. Hakeem Jeffries, a Democratic leader in the House. “But more has to be done,’’ Schumer said.

In June, the House of Representatives held a hearing on the reparations bill, resulting in impassioned testimony from witnesses including writer Ta-Nehisi Coates and actor Danny Glover.

Coates directly addressed McConnell’s opposition to the bill during his remarks.

“We grant that Mr. McConnell was not alive for Appomattox…He was alive to witness kleptocracy in his native Alabama, in a regime premised by electoral theft. Majority Leader McConnell cited the passage of civil rights legislation yesterday, as well he should, because he was alive to witness the harassment, jailing, and betrayal of those responsible for those legislation, our government sworn to protect them.”

Lawmakers on Wednesday held the first congressional hearing in more than a decade on reparations, spotlighting the debate over whether the United States should consider compensation for the descendants of slaves in the United States. (June 19) AP — See full hearing here