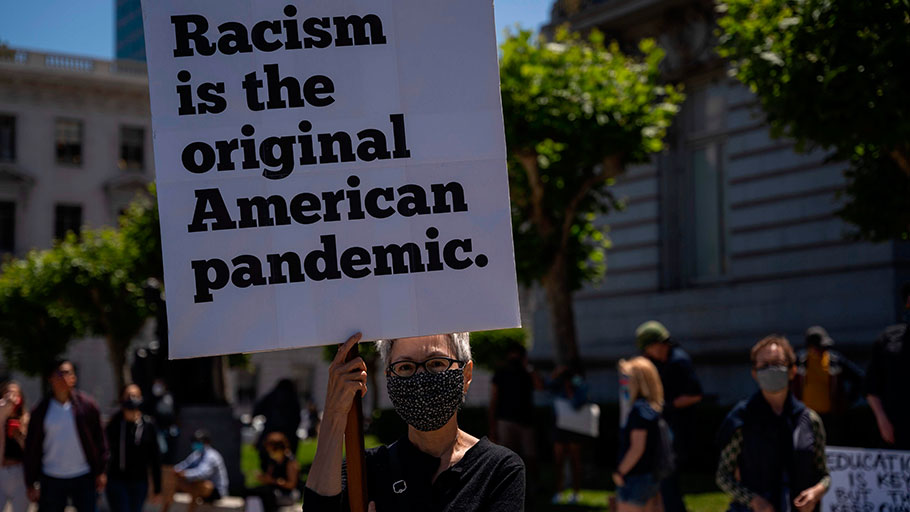 Reparations need to be part of the conversation about racial justice

A woman takes part in a rally to mark Juneteenth on June 19 in San Francisco. (Vivian Lin/AFP/Getty Images)

Over the past month, protests across the country, and even the world, have erupted in response to the death of George Floyd by white Minneapolis police officer Derek Chauvin. While the protests have focused on police violence, the issues of racism are deeply rooted and multifaceted. In fact, addressing police brutality is not enough. Racial equality also demands addressing the economic inequality begot by centuries of white supremacy.

Since the days of slavery, white wealth has been built on the backs of black people. Historian Steven Deyle estimates the value of all enslaved African Americans across the American South in 1860 as at least $3 billion — three times the amount of all capital in the North and South combined, 12 times the value of the cotton crop and seven times the value of all currency in circulation. Simply put, African Americans were the genesis of American wealth and prosperity during the antebellum period. Enslaved people themselves were counted as property and then their labor created products sold domestically and internationally in ways that boosted value of the country’s currency.

Washington, D.C., slave owners were paid reparations during the Civil War. President Lincoln worried that slave owners in border states would defect to the Confederacy. To ensure these slaveholders remained loyal to the Union, even as their states voluntarily emancipated slaves, Lincoln compensated them for their losses. In Washington, federal legislation awarded them up to $300 for every emancipated enslaved person.

While Union General William T. Sherman’s Special Field Order No. 15 initially made similar promises of 40 acres of land to former slaves as well as promises of autonomous, self-sufficient African American communities stretching along the coasts of South Carolina, Florida and Georgia, President Andrew Johnson overturned it, returning the land to the very people who had declared war on the United States.

After the Civil War, freed African Americans almost immediately sought recompense for the horrors they endured. Callie House was one of those pioneers. In 1891, while working as a seamstress and washerwoman, she first learned about the idea of reparations through a pamphlet called “Freedmen’s Pension Bill: A Plea for American Freedmen.” Despite her concerns with the author’s motives — he was a white Democrat who wanted to manipulate the postwar situation and boost the economy to benefit white Southerners — she saw an opportunity to reframe the reparations debate in a way that would give former slaves the help they needed.

House joined Isaiah Dickerson, an African American teacher and minister, to launch the National Ex-Slave Mutual Relief, Bounty and Pension Association in 1898. They rooted their petitions to Congress in the idea that slaves deserved compensation for their military service, just like white Union veterans and their families. The group called attention to the unpaid labor of slaves in the antebellum South, but also to the discrimination that black Civil War veterans experienced in trying to claim pensions.

The association’s mission was twofold: lobbying Congress to pass a pension bill for former slaves and also providing mutual aid to sick, dying and needy members. It held annual conventions and sent materials to state and local chapters and by 1916 had approximately 300,000 members. Congress never passed this legislation and the movement ended when House was sent to jail on false and trumped up charges of fraud in 1916. Political activism had a price.

It wasn’t just the federal government that refused to respect black property rights after the Civil War. White violence toward African Americans often jealously targeted prosperous African Americans, despite whites claiming to be avenging the honor of white women. That was the case in the Greenwood neighborhood of Tulsa — an affluent area that earned the nickname Black Wall Street.

On May 30, 1921, false accusations that Dick Rowland groped Sarah Page in an elevator spelled trouble for this community. After outnumbered black men retreated from a confrontation with armed white men, white mobs burned 35 blocks, destroyed approximately 1,200 houses and 300 people died. Black property and black lives did not matter to these white Americans who destroyed the wealth that African Americans struggled to accumulate decades after being considered property.

The New Deal’s exclusion of African Americans from programs offering economic opportunity only exacerbated the racial wealth gaps that dated to slavery. To prop up an ailing housing market, the Federal Housing Administration and the Home Owners’ Loan Corporation were established to transform a nation where most residents did not own homes into a nation of homeowners. These agencies did so by appraising city neighborhoods as deserving or undeserving of home loans based on the race and ethnicity of their residents.

Many white Americans used these loans to purchase homes in suburbs and gradually entered the middle class, leaving cities with dwindling tax bases to provide public services. African Americans were largely excluded from this wealth-making process and forced to stay in the now-underfunded urban areas.

The civil rights movement produced gains in employment, housing and education for African Americans. Yet, while President Lyndon Johnson shared his vision of affirmative action as a remedy for the harms of slavery and racial segregation at historically black Howard University, in actuality the policy has benefited other groups — notably white women. Even when admitted to colleges and universities, African American students experienced discrimination on campuses, including racially motivated vandalism and a dearth of black senior administrators to advocate for them.

In short, every time that African Americans started to make progress, the forces of white supremacy, motivated by jealousy and fear, thwarted their progress. The results have been disastrous: African Americans consistently have had the lowest household income of all racial groups over the past 50 years. The covid-19 crisis has only exacerbated these disparities. Eighty percent of African American workers are unable to work from home and are dying from the virus at disproportionately high rates, while the declining economy has created a 16.8 percent unemployment rate for blacks compared to a 12.4 percent unemployment rate for whites.

This economic isolation, in addition to police violence, explains the massive protests in the wake of the killing of George Floyd.

This long parade of government policies that made building wealth more difficult for African Americans is why the late Congressman John Conyers Jr. proposed H.R. 40, a reparations bill, in every congressional session from 1989 through 2017. Rep. Sheila Jackson Lee has sponsored a more recent iteration to force a new national conversation on the topic.

While many white Americans question why they should have to contribute to reparations when their families never owned slaves or were not even in the United States until long after abolition, understanding how government policy held African Americans back economically — and advantaged whites — long after ending slavery, shows why the reparations discussion is once again growing. Economist William Darity highlights various potential forms of reparations, such as direct payments to descendants of enslaved African Americans and a trust fund where African Americans could apply for grants for “asset-building projects” including homeownership, higher education or business grants. Such policies would be a symbolically significant step to acknowledge and address the way that racism has limited African Americans’ economic mobility since the nation’s founding.

This article was originally posted by The Washington Post.

Nichole Nelson is a 2020 Ph.D. graduate of Yale University and her research focuses on the history of the Civil Rights and Fair Housing Movements.